Last Thursday night, AWNY members and art aficionados alike gathered in the industrial setting of Chelsea’s Denise Bibro Fine Art gallery to celebrate Krysia Wood’s exhibition “Fresh” and get inspired with a private talk from the artist herself.

The night kicked off with casual chit chat gathered around Krysia’s iridescent canvases, juxtaposed with the cement walls of the gallery. Krysia’s paintings marry memories of the Australian Eastern coastline with current perspectives on America’s North East coastline, encouraging us Aussie expats into a meditative and reflective state.

The paintings themselves are extraordinary, with an interesting take on light, vegetation and nature, created with pearlescent acrylic paint. The most striking aspect of the artwork was the creative use of shapes, which challenged expectations of traditional seascapes and invited closer observation of the work in front of us.

There was a deeper appreciation for the paintings upon meeting the woman behind the art. We were fortunate enough to hear Krysia deliver a speech about turning on the creative brain (to be further detailed in her upcoming book, released late this year) and learn exactly what makes her work so intriguing.

In her talk, Krysia encouraged everyone to embrace their mistakes, which was crucial for her when creating her exquisite canvases.

“If I organized my colours and did a perfect paint by numbers and showed you how absolutely perfect my canvas was, I can guarantee it would leave you cold. Layers of mistakes form the underpainting,” she said.

She explained her work is made up of layer upon layer of different colors, images and most of all – mistakes. She said this is what makes the difference and gives her work depth and interest, and encouraged everyone to apply these principles to their own lives. She says mistakes can be miracles.

It’s no wonder she was the first Australian artist to be contracted by the Wentworth Gallery, America’s largest gallery group.

So why is it so important to turn on our creative brains? What if we work in a field where we predominately use the left side of our brain, such as engineering or finance?

Krysia explains that some of the most extraordinary brains from left brain industries have made incredible advances in technology by using the right side of their brain – their creative brain.

In fact, one scientist threw out every known theory about stomach ulcers and made a revelation by discovering they were in fact caused by bacteria and not stress, as previously thought. He decided to start from scratch knowing nothing, and this blank canvas triggered his creative thinking.

Krysia said that entering this process is very similar to being kindergartner, and it’s important to reconnect with this past stage of our lives. 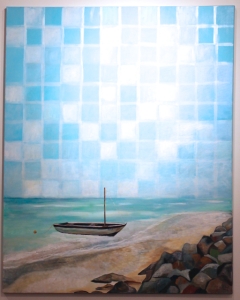 “You see kids running around with messy fingers and they are on a creative high. They know what they want, but not one of them knows what they’re doing.

“Remember what it was like as a child, when nothing would stop you,” she said.

When you think of some of the most successful people in the world, and how their desire and creativity has led them to change the world, you definitely get inspired to follow Krysia’s advice.

Her final instructions? Find something that leaves you refreshed. In her own words, find your ‘George’. For Krysia, her “George” is a trip to Barnes and Noble with a coffee and some of the world’s best minds immortalized through literature. She developed the code name with her husband, since even half an hour with her “George” will leave her feeling refreshed.

Krysia is an entertaining and charismatic speaker whose energy is perfectly translated in her artistic works. Her talk was truly inspirational and I’m positive she gave every attendee a burgeoning desire to tap into their own creativity.

My favorite sentiment from the night?

“Don’t stop yourself because of what you don’t know.”

I’ll be taking that with me for the rest of my NYC adventure.