Come along to hear three up and coming Australian Authors speak about their careers and most recent books.

We are delighted to host Georgia Clark, Rachel Hills and Christine Piper in a panel discussion facilitated by journalist Pip Cummings.

Looking forward to seeing you all and hearing about some great new Australian literature.

Pip Cummings is a writer and editor whose career spans newspaper, magazine and digital publishing. She has worked as an online news editor, a newspaper section editor and features writer and a magazine deputy editor, as well as as a freelance writer for a range of titles, including the Sydney Morning Herald and the Melbourne Age, the ABC Arts Gateway, and US glossies Gotham, Hamptons, Art Basel Miami Beach and Capitol File.  Pip is a founding co-editor and contributor to the specialist women’s travel website Holiday Goddess and was a co-curator and launch team member of the TEDx Sydney conference, now in its fifth year. Pip was born in the US and raised in Australia, returning to live in New York in June 2011. She is a member of the Newswomen’s Club of New York and was a judge of the the 2013 Front Page Awards, which honour journalistic excellence by newswomen across all media. www.pipcummings.com

Georgia Clark first worked as editor of The Brag, a weekly music street press magazine in Sydney. She then became an online producer for the popular Australian soap opera, Home & Away and an online writer for Fremantle Media, Australia. Georgia moved to New York City in 2009 to pursue a career in teen and lifestyle journalism. Her articles have featured in various publications, including Cosmo, CLEO, Daily Life, Sunday Life and Girlfriend. Georgia currently works as the senior digital creative at Showtime Networks, where she produces the award-winning SHO Sync app. Despite refusing to own a smart phone, in her new futuristic fantasy novel Parched, Georgia crafts a thrilling story of robots, renewable resources, and romance. Georgia is also a travel enthusiast. She enjoys improv, studies comedy at the Upright Citizens Brigade Theater, and hosts a monthly show in the East Village with a team called Dreamboat.

Rachel Hills is an Australian thinker and journalist living in New York City. Her book The Sex Myth (forthcoming Simon & Schuster 2015), an analysis of Western culture’s obsession with sexuality and its unintended consequences, is based on more than 200 in-depth interviews across North America, Europe and Australia. Rachel is interested in the intersection of social politics and individual experience, and has written on feminism, politics and sexuality for publications including TheAtlantic.com, NYMag.com, Vogue, Cosmopolitan, the Spectator, the Sydney Morning Herald, and many others. Her blog, Musings of an Inappropriate Woman, has more than 100,000 subscribers around the globe and in 2011 was named one of ProBlogger.com’s Blogs to Watch. 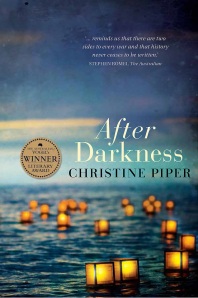 Christine Piper is a writer and editor. Her first novel, After Darkness is about Japanese civilians interned in Australia during WW2. It won the 2014 The Australian/Vogel’s Literary Award and was published in Australia/NZ in April. She won the 2014 Calibre Prize for her essay ‘Unearthing the Past’, about war remembrance in Japan. She has studied at Macquarie University, the Iowa Writers’ Workshop and the University of Technology, Sydney, where she completed a Doctor of Creative Arts degree. Her articles, reviews and short stories have been published in newspapers, magazines, journals and anthologies. She also works as a freelance copy editor. Born in South Korea to a Japanese mother and an Australian father, she was raised in Australia and moved to New York in July 2013, her second time living in the Big Apple.

Light refreshments will be provided