Australian screenwriter Nicole Hansson is bringing to life the story of the Australian War Brides. AWNY is delighted to be able to share this article, written by Nicole, that provides a glimpse into the history of these remarkable women. I had the opportunity to interview one of the Australian War Brides, Jean Gilmer who moved to New York from Sydney Australia in 1946 after meeting her husband, Robert, a US military soldier. Many of the challenges faced by these incredible women resonate with the experiences of AWNY members today, as we make the transition from Australia to New York City. The interview follows Nicole’s post. 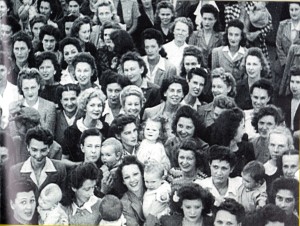 Back in 2003, my sister played a song for me that would literally change my life: The Bridal Train by the Waifs. The band wrote this song for their WWII War Bride grandmother who left Australia for the United States as a young bride to be with her American husband.

Between 1944 and 1946, 15,000 young women from all over Australia immigrated to the United States. They were the wives and fiancés of American servicemen based in the Pacific during World War II. It was the largest contingent of women, babies and children ever to leave Australia.

The sparks of these relationships between the “dashing Yanks” and Australian girls were the beginnings of inspiring journeys. Tales of strength, determination, love and endurance abound, revealing triumphs and failures as they embraced their future.

“A twist of fate finding love in the world’s darkest times” says Betty King, Australian War Bride. I was captivated by the idea of these women’s stories and so began a project involving turning these experiences into a screenplay, giving me the greatest of joy and heartbreak. It is now my aim to share these tales, to raise the profile of the War Brides in the United States and bring their stories to the screen. I have had the honour and privilege to meet these courageous women who have generously shared so much of their lives.

Their stories tell of the bonds between women through adversity and through life with their American husbands. They were daughters, sisters, cousins, friends, taking the leap of faith to leave behind a life of security to an unknown future. The excitement and hope of where they were going contrasted with a sense of loss and grief for what they were leaving behind. Their stories illuminate the experiences of these women and the men they fell in love with. They shine a light on an extraordinary time in history that creates a connection with themes that are relevant today; issues such as family separation and adjusting to a different culture.

It is now over sixty-five years since the Australian War brides became United States citizens, enthusiastically embracing the diverse opportunities that their new country afforded them. Many of these spirited women are now my friends and they are a constant inspiration in my own life when things get tough. My mantra is: “Well if the War Brides could do it, then so can I”. 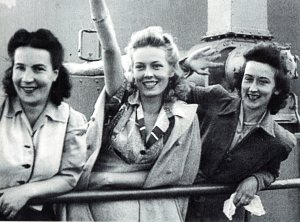 Dr. Robyn Arrowsmith, the Australian PhD Scholar, aka the “Aussie War Bride Guru” has devoted much of her life to collecting and recording these wonderful women’s stories.

I will be travelling from Sydney for the 70th Anniversary WWII War Bride reunion on the Queen Mary in Long Beach, California this year in November. Reminiscing with them about their young selves, (one as young as 17) will be magical. We’ll share stories about crossing the Nullarbor in the middle of summer with an 8 month old baby and nowhere to wash a nappy (they ended up using the bathroom sink, and tied them to the outside of the train windows to dry in the desert air as the train thundered across the plains).

When I sit with these women, sharing their memories, the years literally melt away and I find myself opposite a young, vibrant woman full of passion and strength. The War Brides came from all over Australia, uprooted and transplanted across the United States. When the lovely Hazel Walker, 93, mentioned her childhood memory of the Frangipani tree in her Queensland backyard, it I found this memory symbolic. A friend then sent me the following quote  – which really says it all:

“Frangipanis are tough plants that can survive heat, drought and neglect and still fill the garden with the sweetest perfume” – Anonymous

Joanna Hishon interviewed Mrs. Jean Gilmer, an Australian War Bride who lives in Syracuse, New York. Jean relocated to Binghamton, NY in 1946 after meeting her US husband, Robert (Bob) in Sydney. She and Bob lived in Binghamton for three years and then relocated to LA while Bob trained to become an aircraft mechanic. They also spent one year in Rose Bay in early 1950s, Sydney while Bob worked on the sea planes, and then returned to the USA. She has lived in the same house in Syracuse for 57 years.

JH: How did you meet your husband Robert (Bob)?

JG: My mother and I owned and ran a milk bar on Liverpool Road in the Sydney suburb of Ashfield. Bob was on shore leave – he was injured in a plane crash while stationed in the Philippines – and he was staying in one of the US military camps in Warrick Farm, west of Sydney. While waiting his turn to be sent home to the US, he had the ‘message run’ and would stop in for steak and eggs for one and sixpence each day to the milk bar.

JH: How long after meeting Bob did you marry and then relocate to the US?

JG: We were married on the 6th of September 1944, just 4 short months after meeting. Bob returned to America that same day, but I didn’t follow for another 18 months, in March, 1946. We celebrated our 70th wedding anniversary last year.

JH: What can you remember about the journey?

JG: It was incredible and I forged many friendships on that journey. We had several port stops in Australia before setting off to the US. There were 600 brides and 200 babies and I spent a lot of the journey volunteering my time looking after babies whose mothers were ill with dysentery. I remember a particularly sickly girl saying to me ‘Jean, look after Carolyn for me because I’m not going to make it through this.’ Carolyn was her twelve month old baby. Can you imagine? She did make it, we all did. It was very hard and very sad but what got us through was our attitude.

JH: What was your experience of the transition to America?

JG: I was very excited because I always wanted to go to New York. I didn’t really think much beyond that. Plus the relocation happened so quickly that I didn’t have time to stop and think about what I was about to embark on. But I can plop down most anyplace, and we have lived in several places in America and also had a long stint in Rose Bay while Bob worked on the seaplanes. When I arrived in the US I experienced such a wonderful sense of community. I made some good friends and they would take me grocery shopping and show me what to buy and in what quantities.

JH: What did you miss most about Australia?

JG: It’s always a part of me and even after nearly 70 years in the USA I am an Australian before anything else. I miss the ocean, the smell of the gum trees, meat pies, and crumpets. I used to drive all the way to Canada because we could get these crumpets that were almost the same – not exactly – as what we had in Australia. I did miss my family terribly when I first arrived and we didn’t even have air mail for the first year. Of course nobody had a phone and I only had letters back and forth from my mother. I’d write to my mother a couple of times a week. I was lucky because my mother and sister relocated to America to be with me in 1952.

JH: What advice would you give your 22 year old self setting out on the adventure of a life time in 1944?

JG: If you make up your mind that you can handle it, then you can.