Only second lunch service since re-opening

……So I was willing to cut them some slack. Last time I was here was late summer 2005 , for dinner with friends . The tone of the place was overblown chintz , kitsch gift store offerings and pedestrian food – but a lingering sense of past glory pervaded. Faded and jaded it was – although to the hordes of tourists dining there for “the experience” (of which I was one…) this was the place the likes of Grace Kelly , Marilyn, JFK and Jacqui, Frank Sinatra and later John Lennon and ilk, chose to dine. Whilst this place indeed was New York dining royalty – I felt it certainly was time for the old girl to get a szhzooszh. 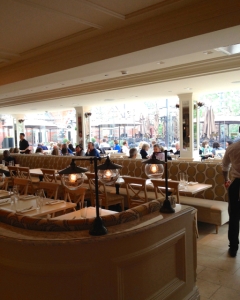 Four years later they closed their doors. Built in the 1870’s to house sheep that grazed on Central Parks Sheep’s Meadow , Tavern on the Green began its life as a restaurant in 1934. It later served as a public visitors centre 2010 – 2012, before being transformed into the very attractive , light , airy and accessible restaurant it is today.

I waited for my fellow ‘lady-who-lunches’ at the bar. Service was quick and my Prosecco well chilled. I was delighted to see a whimsical brass light-wheel above the bar and that all tables and chairs faced the bucolic view. Red studded banquettes started to fill with diners. It was here that I also noted the staff uniforms. Casual – tick, commis in black polo shirts – tick…but the wait staff all wore sad looking unironed shirts. Pet aversion of mine. If you are going to ask your staff wear a shirt and tie at LEAST make sure the fabric stands up to the rigours of hours of service.

We were seated in the glass walled dinning area at a light wood table with leather insert (the tables in the bar are the same only dark) and perused the menu. We settled on a shared Salmon Ceviche followed by the Ham Baguette for me and Turkey Club for Her. And that’s where we went wrong.

The sandwiches that arrived would have looked perfectly acceptable if they were unwrapped from greaseproof paper at school- but not served to grown ups alongside a rather delicious French Rose`. We were seated next to some rather chatty gentlemen who too had been disappointed when their sandwiches arrived. The winner at their table was the guy who had the burger. We all decided that something from the grill would have been a better choice. My friend had been advised to try the Birthday Cake for desert – so we shared that – vanilla layered sponge with a raspberry coulis – nice but nothing special. The coffee , however, was marvellous. A special blend made just for the Tavern, by La Columbe .

I also really enjoyed watching the terrace being set up with outdoor furniture and large market umbrellas for the season – and the swathes of “fairy lights” that looked like transparent wisteria – festooned across the outdoor areas.

As the day was wet everyone was indoors – the ambience was noisy and cheery – with background music from Bing and Frank a nod to days gone by.

So… whilst the food left much to be desired I will try to be kind – the location is fabulous, the vibe relaxed and I can see us heading there for a sunset cocktail , or coffee and cake after a walk with the dog.

Tavern on the Green ….it’s nice to have you back