Many Australians are drawn to NYC for the excitement of the bright lights and big city. Catherine’s love of the outdoors led her one step further to Upstate New York, and she’s now the proud owner of a cabin in The Catskills. In a series of articles for AWNY, Catherine will explore the region and share the best places to visit:

Are You Ready to Get Out of the City?
Once you become settled in NYC—your dry cleaner and local bartender know you as “the Aussie” and you’re earning enough to pay the rent and afford a Broadway show—it’s time to look further afield for greenery, open space, fresh air and a break from the relentless city noise.

One of the most beautiful areas of New York State is the Catskills Region, aka “Upstate”. There are endless options for weekend trips, summer lake getaways, and winter skiing. You could even consider buying and splitting your time between the city and the country.

The Catskills region covers a vast area from Sullivan County in the Southern Catskills, Delaware County to the west (to the Pennsylvania border), Greene County to the north (south of Albany), and Ulster County (east to the Hudson River).

Within this area, there are hundreds of small towns, acres of protected wilderness, active farms with some serious farm-to-table restaurants and wonderful farmers’ markets, a thriving arts scene, a craft beer and distillery industry, and plenty of rivers and lakes for swimming, canoeing and fishing.

What Drew Me to The Catskills?
I spend most of my time in Sullivan County, an hour and a half from the City. It is a magical place. I grew up by the ocean in Tasmania and Perth and when I moved to New York I missed easy access to the beach. What I discovered Upstate is access to beautiful freshwater lakes, and lots of greenery and small towns, which reminds me of Tasmania, as does the bluestone of the mountains. It is common for families in Tasmania to have a “shack”, often built by the family, a little rustic, by the water with a focus on fresh air and the outdoors. The Catskills also offers this.

My Cabin in The Catskills
The cabin I have is comfortable but rustic and over 100 years old. It is surrounded by tall oak and birch trees that attract hummingbirds, woodpeckers, and finches; and the ground cover of ferns and fallen leaves from previous seasons provides a perfect home for chipmunks and squirrels. The property opens onto the lake, so in the summer you can fish and sunbake from the dock, and swim, kayak and canoe. In the winter, the lake freezes over and you can go snowshoeing and ice-fishing.

There’s nothing more relaxing than an early departure from the city on a Friday afternoon in summer, and sitting on the dock with a glass of wine, the last rays of the sun setting over the water, the stars starting to come out in the clear sky, and the smell of campfire smoke and voices carrying over the water enjoying the warm summer evening. It’s different to Australian summers but it has its own uniqueness and beauty to it.  Our cabin in the Catskills is also available for rent and it has been enjoyed by many people visiting the area. 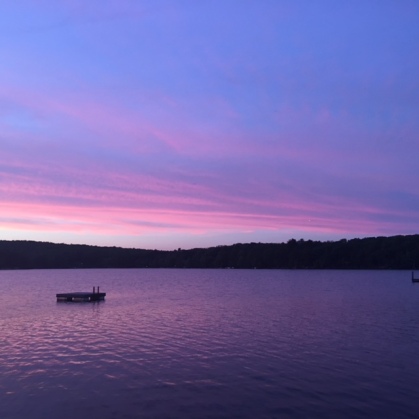 About Catherine
Catherine hails from Hobart and Perth, and previously lived in Indiana, Canberra, and San Diego. Five and a half years ago, she moved to New York for work and, having met her American husband, plans to stay! She works in international affairs with the United Nations. In her free time, Catherine is passionate about her volunteer work with the New York Junior League and she enjoys spending time outdoors running, hiking and traveling. All photos by Catherine.